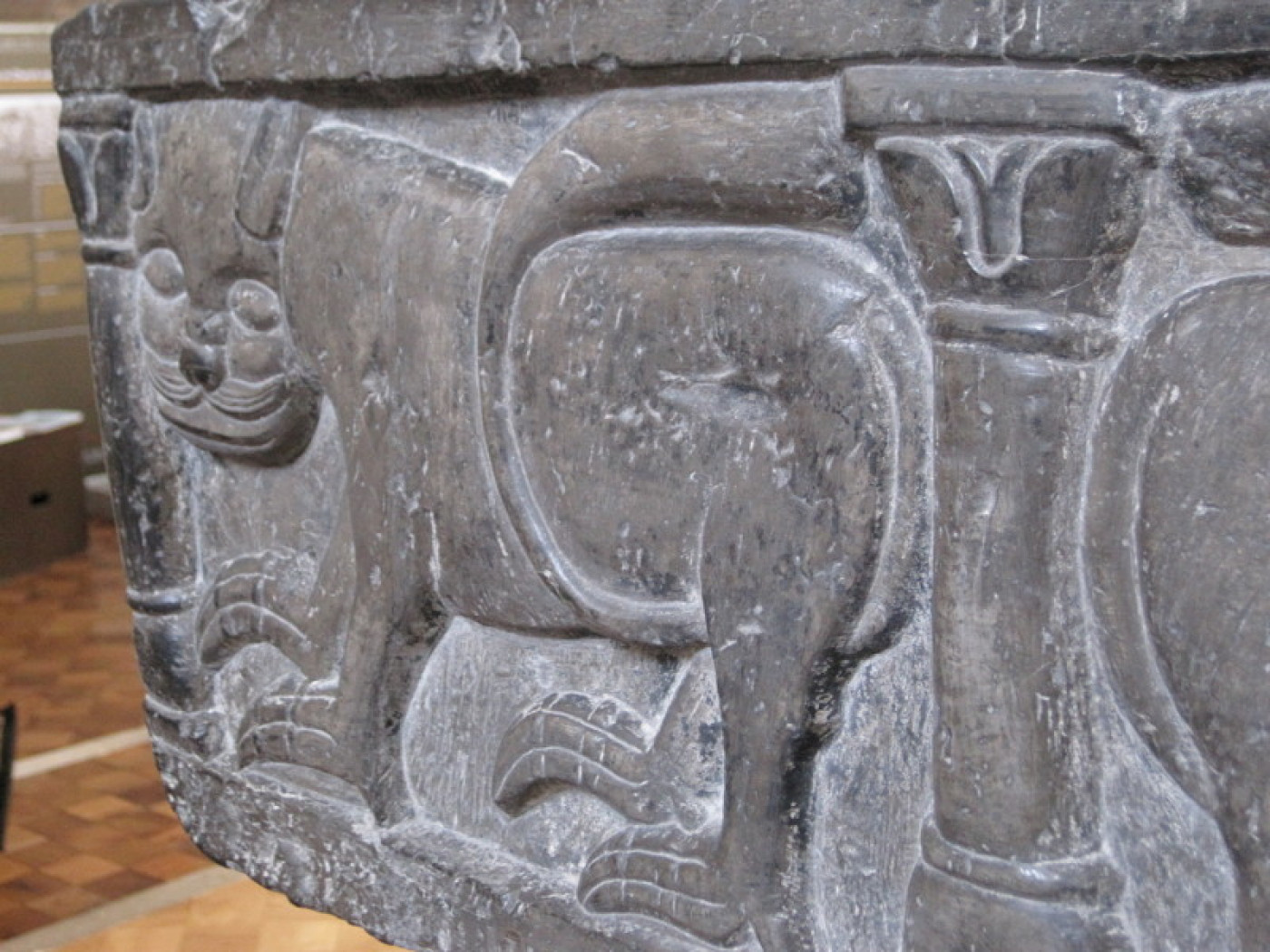 For at least nine centuries a church has stood on this spot as a place for the community, whether it be congregations, lovers of music and the arts or model train enthusiasts!

As a church, St Peter’s served a large parish and the mariners who came into a port bustling with activity during the middle ages, first, probably as a building made of wood then on to a stone made building, which formed part of the Augustinian Priory of St Peter and St Paul during the late 12th century.

It is at this time that the magnificent Tournai Marble font, with its enormous bowl and prowling lions came to St Peter’s. One of only 10 in England and made from a type of limestone from around the town of Tournai in Belgium.

Fast forward to the tudor period and St Peter’s gains prominence as Ipswich’s greatest son Cardinal Thomas Wolsey closes the Priory to use the church as the chapel to his College of the Blessed Virgin Mary.

During this period many changes were made to the building including the repositioning of the tower, addition of the north and south aisles and a new chancel.

Wolsey’s college was short lived when he fell out of favour with King Henry VIII and died in disgrace in 1530 and not long after St Peter’s was given back to the parishioners. Along with the church, the “Wolsey Gate”, a watergate on College Street are all that remains of his grand plans.

St Peter’s continued as a parish church in the following centuries with further extensive restoration work during the late 19th century and continued to serve a congregation until 1973 when it was officially declared as redundant due to the demolition of many homes in the parish and the population being moved away.

The Ipswich Historic Churches Trust took over the care of St Peter’s in 1979 and along with caring for the churches of St Stephen, St Lawrence and St Clement tasked themselves with finding new uses for this collection of medieval churches.

During the 1980s St Peter’s found a new use as the home of the Ipswich Railway Modellers Association. The building was full of layouts of scale model railways depicting real-life scenes of railways from Britain and the world.

After this brief spell St Peter’s again became an unused building, with continuing care by the Ipswich Historic Churches Trust and the Over Stoke History Group, opening for special occasions such as the annual Heritage Open Days in September.

You can find out much more about the history of St Peter’s and the surrounding area on the displays in the corner of the North aisle where you will also find the coffin of the first prior, unearthed in the 19th century and a fragment of another Tournai Marble font which came from another priory in Ipswich where Christchurch Mansion now stands.

In the early 2000s the Ipswich Hospital Band started searching for a new home for the band and it’s training section as space was becoming a premium at the hospital.

One of the board members at the time was Vic Lowne and he came up with the idea of the band setting up home in a redundant church near the Ipswich Waterfront. He along with a working party from the band set about investigating St Peter’s Church as a viable option.

Working with the Ipswich Historic Churches Trust and local firm Nicholas Jacob Architects the plans were drawn up for a centre for the music and the arts. Work then went into funding for the project, and in 2006 the band were awarded a grant of £772,000 from the Heritage Lottery Fund with additional funding from the Churches Trust and Ipswich Borough Council.

After countless hours working on the idea St Peter’s was renovated and the inaugural concert, featuring the Ipswich Hospital Band, was held on Saturday 24th May 2008, compered by former Ipswich Mayor Roger Fern.

Since that time St Peter’s by the Waterfront has hosted hundreds of events. Events have included local organisations holding musical evenings, theatre performances and meetings, and national and international acts performing a whole range of musical genres.

St Peter’s is also home to a number of local groups as well as the bands who set up the venue, including the Suffolk School of Samba who have called St Peter’s home since it opened, Inside Out Community Music Project helping to promote well-being and positive mental health through music, Avenues East who run daytime activity groups for people with disabilities and additional needs and Forward in Faith Ministries who maintain a religious link with the buildings past.

The venue is open regularly during the summer to showcase the fascinating architecture of the building, the font and the amazing Ipswich Charter Hangings.

The hangings have been at St Peter’s since opening and provide a great insight into the history of Ipswich through the ages. They were researched and designed by local lecturer and tutor at Suffolk College Isabel Clover and produced by her current and former students to celebrate the granting of the Royal Charter to Ipswich by King John in 1200.